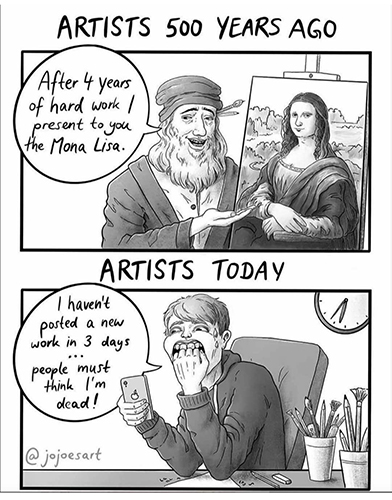 Ironically, I shared this cartoon on my social media accounts a few months ago and it got a few Likes & laughing emojis. While I see the humour in it, it also has the bite of truth that pinches, a bit.

You may or may not know that I’ve been experiencing a creative slump for a while now. If I’m honest with myself, I’ve been wrestling with feelings of general malaise in my chosen field for the last 3 years. I attributed the loss of my mojo first to a relocation & lifestyle change, then to the isolation the pandemic lockdowns promoted, and finally to the loss of a parent. While all those things were very real and not just a figment of an overactive imagination, I don’t think they’re entirely to blame for my inertia.

I’ve noticed that the more time I spend scrolling through social media accounts, the more anaesthetised I become and the less alive I feel. I end up feeling like I need to take a nap. Wow, that sounds dramatic. I know for a fact, I’m not alone in feeling this way. Maybe you feel it, too. More & more often, I’m seeing people I follow on Instagram & Facebook, disappearing for long stretches. I’ve had conversations around this topic with a few of them and some are citing real physical manifestations of the pressures they’re under to show up and post fresh, new content on a regular basis. (read: daily, if not multiple times a day). Most of the people operating under these extremes are small business owners just trying to make a go of it and pay their bills on time. I’m here to tell you, that routine will eventually suck the life blood right out of you. How’s THAT for dramatic?

The culture most of us in developed countries are operating under tells us that we are only valid and valuable members of our society, if we continue to produce something new & exciting every day. It had better be innovative and, if it can be monetized, so much the better! If you, like me, grew up in a family that adhered to the same tenets, it can be a very difficult thing to oppose.

The same culture tells us we mustn’t expose our soft underbelly and that to do so is to risk our credibility and, worse, our marketability. This attitude is toxic and ultimately soul destroying.

I’m not sure when the shift occurred for me, exactly, but I’ve been rebelling against this paradigm, in small ways, for a little while, now. I’m still posting content to my social media accounts, but I’m no longer trying to outguess algorithms or follow the lead of the modern day Joneses who, let’s be honest, are probably just hiding their own struggles behind shiny filters. I’m not going to follow the unwritten rules, anymore and I’m stepping off the path that has led me to burnout in the past. I won’t be adhering to a schedule of creation that dictates when I have to release a new product in order to be relevant, like the hyped up Christmas season, for example. If things naturally align, that’s great.

As a result of my own very private & personal rebellion, I feel so much less stress & pressure to perform and that has been incredibly freeing. I’ve found that my desire to play and explore my creativity in new ways has begun to return again and that feels incredibly inspiring. The crazy thing is, now I want to create those fresh, new things and I’m sharing more.

I understand that social media, or something else very much like it, is here to stay. I’ve chosen to focus on the positive aspects of the medium and, for me, that’s relationship building. I’m going to remain on social media, but I’ve set a few boundaries in place. As with most things, a healthy balance has to be maintained. It can be tricky to navigate and requires constant vigilance, but I believe it can be done. I’m well aware, for example, that I’ve linked to two social media platforms within the body of this essay.

I’ll be using these platforms in whatever way works best for me, in the moment. It may seem like a small step, in the grander scheme of things, but it’s an important one for both my peace of mind and my creativity. I’m feeling a renewed sense of interest in my dream job and THAT’S what I’m going to follow.

Before You Go. Sign up to receive updates & special offers from me. 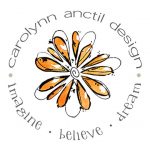